Fun Fact: The title “The Second Law” references a science term; the second law of thermodynamics, which means that in an isolated system, everything tends towards chaos.

In The Second Law, Lynn Dayton Thriller #3, TriCoast Energy executive Lynn Dayton is visiting the company’s San Francisco refinery when it comes under attack. Saddened by the fiery deaths of several workers, she traces the explosion to software malfunctions and contacts cybersecurity chief Kanak Singh to track it back to the source. 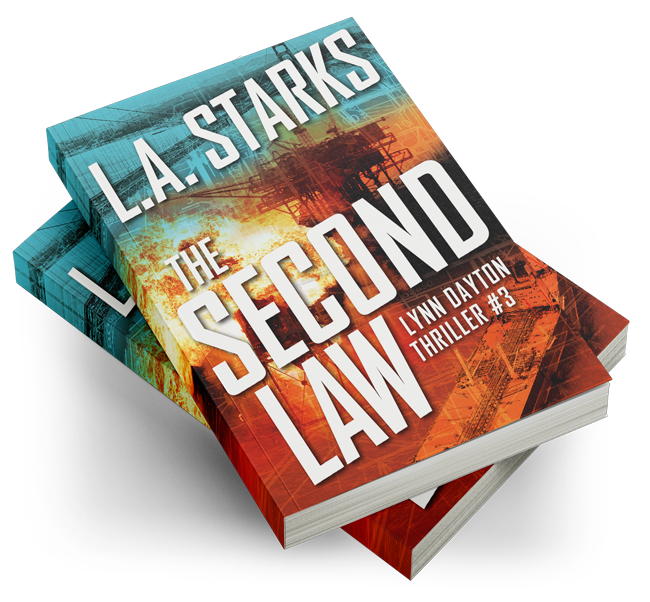 Lynn is still reeling when a TriCoast lease bidding manager is killed in New Orleans. The seeming motive is the theft of his computer containing billion-dollar secret offshore bid plans. Then her long-time mentor and good friend is gunned down in front of her in a Louisiana swamp. What terrible plan lies behind all these crimes?

Lynn races against time to uncover a complex plot that stretches from murder in Vienna to a natural gas terminal attack in the Baltic to a major Caribbean oil installation off U.S. shores. Lynn is baffled as she learns of a high-stakes takeover bid by a mysterious group called the Second Law. Who are these people? Worse, who is the mole inside TriCoast that is feeding them so much deadly information? Unless she can find out, thousands more are scheduled to die.

Reading & Discussion Questions for The Second Law by L. A. Starks

“The result is a compelling thriller that’s hard to put down, absorbingly powerful in both characterization and plot and filled with satisfying twists and turns that introduce readers to the world of not just refinery safety and operations, but high-stakes international intrigue between groups holding special government interests at the heart of their actions. Readers who enjoy stories of mystery, murder, mayhem and espionage will relish the intricate, complex yet highly accessible series of events THE SECOND LAW unfolds.”

Rating: 5 out of 5 stars. “Second Law kept me on pins and needles! Oh, my gosh, was it good. Every time I thought things would calm, things exploded again. This is most definitely a keeper to be read again and again.”

“Lynn Dayton is a wonderful character. She appears in her third thriller The Second Law that I found gripping and fascinating all the way through. I hope that I am not mansplaining when I say that Ms. Starks’ Dayton would be a fabulous role model as a business executive, as a practical scientist/engineer and just as a positive human being – and of course as a woman leader.
While I have scientific training it is biological and so I found the scientific side of the novel very informative and interesting, but not in a “for nerds only” sort of way. The susceptibility of the petrochemical industry to hacking shocked me and by extension to so many other industries, I was forced to rethink the vulnerability of the world to evil players.
I tend to think of terror and sabotage as limited and driven by relatively contained ideological players, but when the ideology is money and power and control of markets, the players can be very powerful “teams” indeed – read “nations without a conscience”, but could that be all of them?
So readers, for high adventure in petrochemical production and sales, for market manipulation using the worst tricks possible, for hacking far in advance of pimply basement dwellers, for decision-making at the high end of business, get hold of The Second Law by L. A. Starks. I am seeking out the first two on Amazon if that is any recommendation as to how much I enjoyed this book.”

Rating: 5 Stars “A brilliantly up-to-date thriller that entertains as well as educates…. L. A. Starks’ latest novel, the third in Lynn Dayton Thriller series is vividly up-to-date, involving global cybersecurity concerns and oil and energy politics. TriCoast Energy executive, the ever vigilant Lynn Dayton races to uncover a global conspiracy that threatens to disrupt the company’s oil refineries across various locations in the country while a shadowy Chinese group recruits dangerous people and works tirelessly to take over the American oil refineries’ operations for their own twisted reasons with the help of inside information from a TriCoast Energy employee. The chapters shift between different settings from New Orleans to California, Europe, and South America, and despite the author’s multiple focus in terms of settings and characters, the narrative is easy to follow. Starks is good at the details (the reader learns a lot about working of oil refineries), her narrative flows easily, and she writes crisp action scenes without much blood and violence. The pace of the book is fast, which keeps the reader hooked to the book… Among shifting locations and a large cast of characters, Starks proficiently builds suspense toward a tense, satisfying finale. Stark’s authoritative portrayal of the way things are done in the oil business brings the story to life and makes The Second Law a convincing, engrossing read. The science thriller fans will look forward to the next installment in the series.”

“A global conspiracy to disrupt American oil refineries surrounds energy executive Lynn Dayton in escalating threats to her employees, facilities, and eventually herself. In THE SECOND LAW by LA Starks, murder and mayhem follow Lynn to California, New Orleans, Europe, and South America as she tries to protect her company from Chinese hackers, American protestors, Russian assassins, and Philippino suicide bombers. Readers who enjoy real science and technology in their fiction will find accurate backdrops to this globetrotting mystery-thriller that gives a unique insider’s perspective on the petroleum industry in the US—and the ongoing battle to protect it from sabotage.”