When several people involved in bidding for an oil refinery are murdered, the situation becomes far more than a billion-dollar business deal. 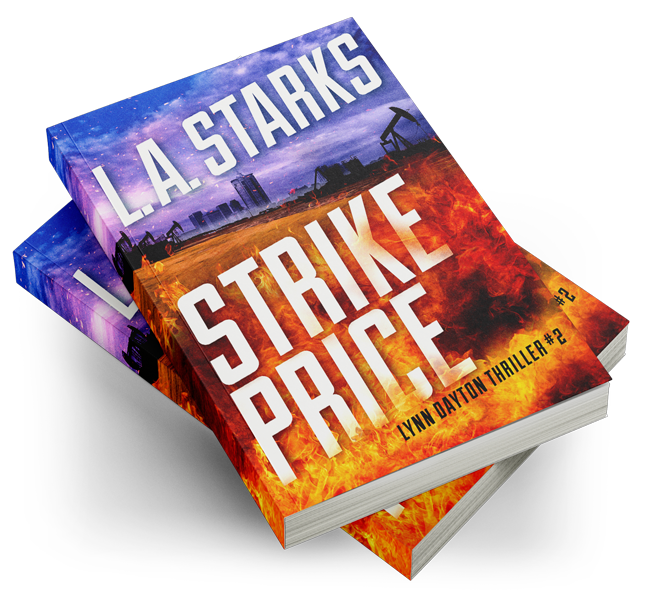 A self-made woman, Lynn Dayton fights to save lives after escalating attacks eventually reveal a hired assassin’s plan to draw another global power into dangerous confrontation with the United States over trillion-dollar oil stakes.

Lynn Dayton and Cherokee tribal executive Jesse Drum must learn to trust each other so they can find and stop the killers. Can sobering up really be fatal? How have so many of the deaths been made to appear accidental? Who’s creating weapons with modern poisons and ancient Cherokee arts?

Reading & Discussion Questions for Strike Price by L. A. Starks

“…dialogue is quick and punchy … Starks handles the pacing and suspense masterfully … An often gripping novel with a determined heroine, a high body count and a mysterious villain.”

“STRIKE PRICE takes the reader from Oklahoma Indian reservations to the streets of Florence, in an imaginative and well informed fusion of oil refining economics, Native American politics, and the potential for lethal mayhem in the global energy market.”

“Ms. Starks has an eye for detail and richly paints a picture of the Oklahoma landscape and its people. The insight given through the killers mind is especially riveting as the reader will be far into the story before everything falls together and the killer is unmasked.”

“If you’re looking for big business wheeling-and-dealing, international intrigue, murder, mayhem and high-geared action, you’ve come to the right place. Toss in a charming and nervy protagonist like Lynn Dayton and L.A. Stark’s STRIKE PRICE is right on the money. Well-written, well-plotted and well worth a reader’s time…”

4 Stars “Wow! This was a wild ride. Many things I did not know about the oil industry and Native Americans in this book, I found very interesting for sure. It took me awhile to read this one, I had to back track a few times to catch up with the ever-changing story/plot which was very suspenceful (sic) and intriguing. I enjoyred reading STRIKE PRICE – very good book.”