A rogue force controlling the planet’s oil supply would hold a knife to its throat. The planet’s refineries, where oil becomes gasoline, may be an easier grab. 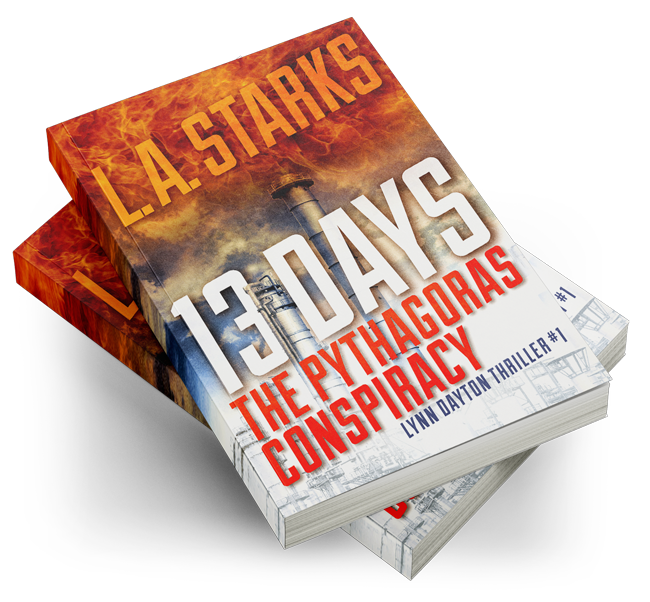 Lynn Dayton, 37, self-made refining executive, manages six vast complexes that transform oil into gasoline. Robert Guillard, 33, a suave Parisian intellectual believes, as did the cult around Pythagoras, that his genius confers moral authority. He directs the sabotage of US refineries, one by one. But his financing from an Asian refining cartel terminates in thirteen days unless he produces massive shutdowns.

Robert schemes to coerce Lynn into collaborating as he pursues his outwardly humanitarian goal of building refineries in Third World countries. If she refuses, he will hold hostage her sister, Ceil Dayton, 30, whom he has lured to Paris. Ceil, in turn, hides a brutal secret.

Threats to Lynn’s life intensify. Desperate for the safety of her co- workers, whom she considers in greater danger, she works cease- lessly to find the real cause of the “accident” and the saboteur. Although her company security force notifies the FBI of her suspicions, the bureau considers her facts inadequate to justify adding resources.

Within a few days, explosions and fires at nearby refineries claim victims. The resulting fuel shortage affects the lives of everyone in North America.

Then Lynn is kidnapped. She fights for her life on a catwalk above a storage tank of hot, sulfurous oil and escapes.

Deciphering the full extent of Robert’s scheme, she flies to Paris. But will she be in time to derail Robert’s plans and save her sister?

Reading & Discussion Questions for
13 Days: The Pythagoras Conspiracy by L. A. Starks

What could spike gasoline prices up again?

Energy executive Lynn Dayton thinks her challenge is fixing the troubled refinery her company has just acquired on the Houston Ship Channel. But soon she must save it, and other oil refineries, from the industrial havoc and deaths directed by a French saboteur, simultaneously fighting off threats to her own life.

As Lynn deals with chemical leaks, disloyal employees, a new season of hurricanes, and mounting casualties, Robert Guillard, a corrupted idealist, plans to manipulate her through her vulnerable sister.

But Robert underestimates his prey.

4 stars. “Wow…it took me a while to really get sucked into the novel, but once I was hooked and found myself in a comfy couch, I was flipping the pages as fast as possible. I loved the whole plot because I found it to be very unique. The characters were very realistic and I loved how the story is told from both the protagonist and villain’s point of view.”

5 Stars. “I found the book not only entertaining but educational. L. A. Starks made sure the reader understood all the oil refinery terminology… I enjoyed the entire story and liked the tenacity of the main character Lynn! I look forward to reading more books in the future by L. A. Starks.”